“Miracles start to happen when you give as much energy to your dreams as you do to your fears.”

For FC Barcelona, the night of Wednesday, March 8, 2017 was a time when fear was put aside, and dreams were once again energized.

The events of the second leg between Barcelona and Paris Saint-Germain were nothing short of a dream. And for PSG, a nightmare.

The great start with Luis Suarez’s goal was the dream start on the dream night. But after Luisito’s goal, it felt like PSG were going to park the bus and not allow anything inside the box. Barça begin to think — and shoot — outside the box, as long shots from Neymar and Andres Iniesta couldn’t find the back of the net.

I’m not going to lie, I felt terrible after Edinson Cavani’s goal. There was nothing Marc-Andre ter Stegen could do. I felt like the miracle I thought was going to happen had suddenly ended. It felt like all of Barcelona had come so close, just one goal away from pulling even in the tie, to being stopped near the finish line.

Then, the impossible comeback became a unexpected and wonderful reality.

Ig Neymar: “All the glory and honour to you God. Nothing’s impossible for the one who believes in You” pic.twitter.com/VMe4LAlmhg

With Neymar’s free kick goal, it became a 4-5 agg. scoreline. It felt like a goal for pride, but not many were thinking it was the beginning of seven minutes of history.

Once Suarez was tripped up in the box by Marquinhos, a feeling of joyous confusion entered many Culés’ minds. Joyous because there was still hope, but confusion because many Culés were unsure if the comeback was actually possible, especially since the match was in stoppage time. Neymar’s PK goal made it 5-5 on agg. with PSG up on the away goal.

Five minutes added and four minutes left in what could be the greatest comeback in football history if Barcelona scored one more goal.

It seemed like it was going to be the most painful loss in recent FCB history — for the comeback to come just short — or arguably the most joyous night at the Camp Nou in recent history.

Thankfully, the world was witness to the latter.

It had to be Neymar. The Brazilian’s service into the box found the foot of Sergi Robert — yes, Sergi Roberto — who booted in FC Barcelona into the quarterfinals of the Champions League and booted out PSG. Grande Sergi! The Camp Nou erupted in ecstasy and the football world from all corners of the world could hear the fans’ joy.

No lie, when I saw the goal and the scoreline, I had to control my emotions. Why? Because like you who is reading this column, this club means so much to me.

For me, Barcelona represents me, just like I, as a Culé, represent the club. With all due respect to all other clubs, there is no other club in the world that that is unbreakable connection with its fans. None — and no one can ever and will ever change my mind about that.

Moments like this are emotional. For football fans and in particular, for Culés, FC Barcelona’s comeback was a reminder of how wonderful the sport of football is. Football has the power to bring people together, make us cry in sadness and joy together, make us dream together, and teach us that anything is truly possible.

While we’ve seen great comebacks in many other sports the past year, like the New England Patriots over the Atlanta Falcons, Cleveland Cavaliers over the Golden State Warriors, and the Chicago Cubs over the Cleveland Indians.

While all of the comebacks I just mentioned are special in their own way, Barcelona’s comeback was the greater one. To need three goals with less than 10 minutes to go is a monumental task for any team to accomplish. At one point during the last minutes of the match, the in-game odds for Barcelona scoring three goals and winning the tie were 100-1, according to ESPN FC. Compare that to the Patriots’ odds of coming back to beat the Falcons in Super Bowl 51 when New England was down 28-3, which were 16-1 in-game odds.

Barcelona’s chances to come back were six times as unlikely to win as the Patriots.

Only the magic of Barça can make the seemingly dire into ecstasy.

The entire team was magic, but if one player embodied the magic of the night, it was Neymar. The Brazilian had one of his greatest nights of his Barça career. He was causing PSG problems from the start. Neymar did almost everything for the team offensively, from nearly scoring a golazo from long range in the first half, to having the best seven minutes of his career in the end.

And what a final seven minutes it was.

For many, Neymar’s free kick goal in the 88th minute came as a bit of a shock. It’s not that he can’t make goals like that, it’s just that it seemed like Neymar was going to go far post towards goal. A penalty called in favor of Barcelona just a minute later gave Neymar a chance to cut the lead. Once again, a smooth PK from Neymar didn’t give Kevin Trapp a chance to make the stop. As previously mentioned, Neymar’s service into the box found Roberto’s foot for the win.

After the match, Neymar said it was the best game he’s ever played in. Against PSG, it was Neymar’s finest match as an FC Barcelona player so far in his young career.

Marc-Andre ter Stegen was brilliant on the night. The moment of the night from the German was his stop on Cavani’s stop in the 64th minute to stop PSG from finishing off Barcelona. Whenever PSG threatened, MAtS was more than ready.

I worried that Luis Suarez would get frustrated too easily in a 0-4 deficit, but not on this night. His goal and feed to Iniesta to set up the second goal was classic Luisito. Samuel Umtiti was on point for the match. I can’t help but imagine what Barcelona can accomplish with this 23-year-old for years to come. His awareness and interceptions are that of a veteran player’s skill set.

Lionel Messi wasn’t at his finest, but he didn’t need to be on the night. The entire team was on a high one on could’ve brought down. His penalty kick was a powerful one as the ball raced by Trapp. Andres Iniesta showed why he’s “el cerebro” del Barça. 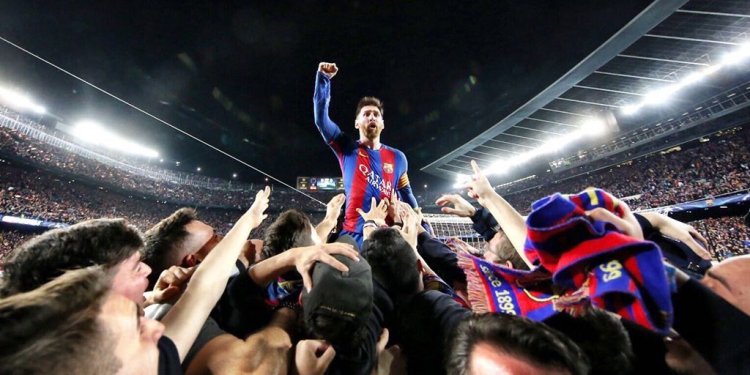 Every since Barcelona’s win over Leganés with a late goal by Messi, the Catalans have been more loose. I don’t know if the Luis Enrique announcement a few days later further relaxed the team or not, but this team is playing “with house money,” if you will. They’re “all in” this season.

Part of me thinks it could be due to the sluggish start to the first half of the season. Another part could be because the players know this Lucho-era FCB team will end in June, there’s no reason to play tight for the reason of the season.

It’s a bit like senior year of high school or college, if you will. You know it’s about to end, so you might as well have fun and go “all in” rather than have any regrets.

It still doesn’t feel real. But fortunately, it is real and it something all Barça fans will remember for the rest of their lives.

Who knows what will happen for this Barcelona team the rest of the season. But one thing I do know is that this match — this “Miracle at the Camp Nou” — will be a moment in time that combined magic, determination, luck, skill, and destiny into a single match on a night that history will remember for all time. 6-1 (6-5 on agg.) will always be a part of our memories.

Gràcies, jugadores. Gràcies Lucho. Thank you for reminding us that dreams do come true if you work hard and never stop believing, even when we’re facing impossible odds.

We’re FC Barcelona. We’re born dreamers, believers in magic, and we wouldn’t have it any other way.

Now more than ever, Visca el Barça i Visca Catalunya.